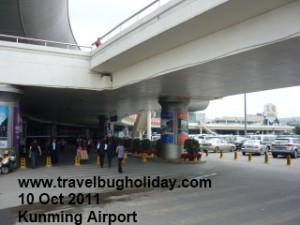 Mon 10 Oct 2011 arrived from Singapore at Kunming Airport. The airport is very busy as in any Chinese airport. I had learned some Mandarin so it is slightly 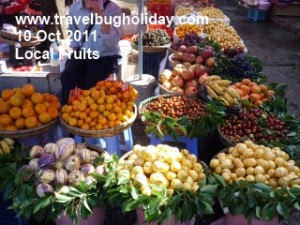 easier for me as compared if I don’t speak the language at all. The people at Kunming are still not as good as their friends at Peking or Shanghai in their spoken En 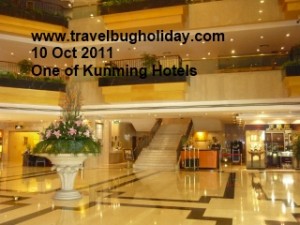 One of Kunming Hotel

glish language. Maybe they are just shy and didn’t like speaking

English much. I know for sure they can 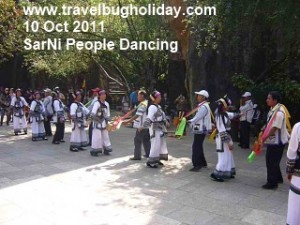 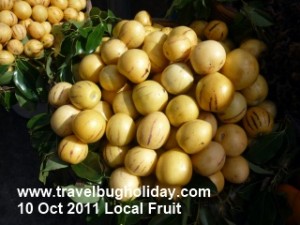 A tip to note…. Some Chinese are 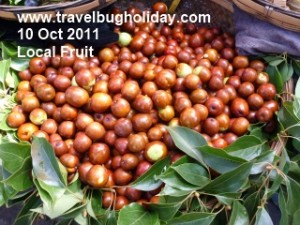 superstitious and do not like their photos taken, especially the older generation

and babies. Some believe that the devils from the other life will come to take them away if their picture is exposed. I was told that some of the young minority’s girls also do not like 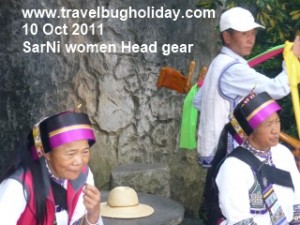 Climate is temperate. Temp average 24degree C in Summer and in 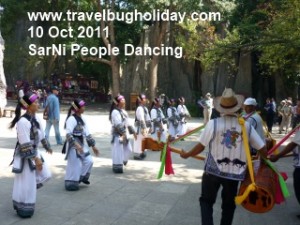 Winter it is an average 9 degree C. I have been wearing T shirts all day and wore a light jacket when I am in certain higher parts of the county where it can be cool. It is such a relief as I was previously in Singapore on a stopover.

Kunming is the capital of Yunan province and is situated in a basin. Yunan means Beyond the clouds in Chinese. Kunming has many fascinating ethnic minorities living amongst the breathtaking landscape. There are in total 52 minorities in Yunan out of the 56 total in whole of China.

Today we went to the Stone forest and saw the SarNi minorities, where some of the families still lived in the Stone forest and arm in the Stone forest ( as evidence as by Yak dungs as we walked around in the forest). The SarNi people love to have dark skin and love multi colour customs. SarNi are considered the “Happy” people. They love drinking. Even babies are feed with alcohol with chopsticks dipped with alcohol and put in their mouth. The touch festival is their main festival where the spring festival is the main festival among the Chinese Han people (not minorities).

The headdress of the girls/women signified their married status. If you see the women folks wear 2 horns on their headdress, which means they are single. One horn means engaged and if the horn is flatten in front, it means they are married. I was informed that the SaNi women are not particular if the men are married or not but if you touch the single women horns and f they like you, or whatever race you are (Caucasian or Chinese), they will take you back to be village to be married to them. So men beware…. I was told that the reason they don’t mind whoever is because they are not as educated as most Han Chinese people.

For people who are interested in the living standard of the people in Kunming, check out this statistic first. Prices of petrol are very reasonable. 7 Yuan per litre and a dozen roses costs 5 Yuan. Due to the temperate climate, flowers are one of their main exports to the world especially to the South East Asian countries. Unless you work for the government, you have to pay for your kid’s kindergarden education. That is approx Yuan 1,500 a month. High school is free and that includes school books. However parents have to pay for University education. An average graduate salary is approx Yuan 36,000 per year. Private health insurance is approx Yuan 9,000 a year. A small apartment rental is approx 1,800 yearly, private car expenses Yuan 1,500 yearly. Not much let if you have 2 children o kinder age. Most people tend to take public transport as that only cost Yuan1 per trip.

One of the locals told me that they take the children to feed seagulls in the park as these seagulls migrate from Siberia in thousands since 1985. The Chinese viewed these seagulls as a good omen and does not shoot to kill them for food. The government infact told residents not to the gulls’ human food as that is bad for the bird’s health, so residents purchase and feed them with special bird bread.
We love to hear from you. Give us your feedback on this article. Leave us a comment