There are 2 kinds of city tours in South Korea.

The names are very similar but they are run by different companies. Both buses look different. If the bus stops happen to be near each other they are most likely to be on the opposite side of the road to avoid confusions eg in the case at Dongdaemun market area. You can hop on the wrong bus, especially when you are boarding the bus for the first time. I nearly make the mistake when the bus stop sign was not there during a road construction. The traditional market bus is on the side of the shopping complex called Doota. In fact, there is a ticket booth just outside of the shopping centre for the traditional market tour bus at Dongdaemun. 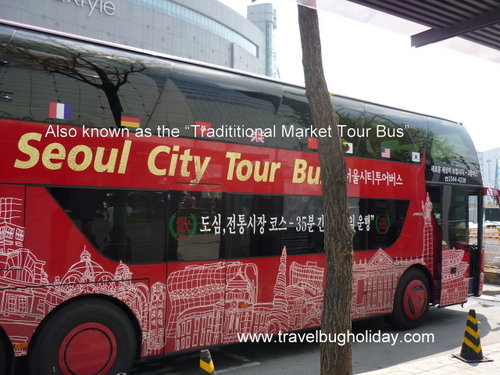 The Traditional Markets Bus Tour has 15 stops. This is a double-decker bus whereby you will discover Korean culture, food, history and shopping through a tour of Korean traditional markets such as Seoul’s most popular markets: Namdaemun Market, Gwangjang Market, and Yangnyeong Medicinal Market. 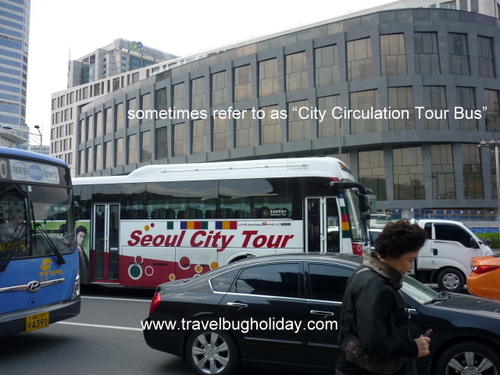 The other Seoul City Bus (single decker city circulation tour with 26 stops) stop is on the other side of the road. If you cannot find that bus stop easily, just stand facing the shopping complex Mizoral (but on the opposite side of the road). There is no ticket booth for this bus at Dongdaemun. You can purchase the bus ticket on board the bus if there are seats available. Normally there is. If you wish to purchase a ticket with a credit card for the city circulation tour, you must buy it at the Gwanghwamun ticket booth as this bus does not carry credit card machines.
Seoul City Bus Route:-
01.Gwanghwamun
02.Deoksu Palace
03.Namdaemun Market
04.Seoul Station
05.USO
06.Yongsan Station
07.National Museum of Korea
08.War Memorial of Korea
09.United States Army Garrison Yongsan
10.Itaewon
11.Crown Hotel
12.Myeongdong
13.Namsangol Hanok Village/Korea House
14.Grand Ambassador Hotel
15.National Theater of Korea
16.Namsan Tower
17.Hyatt Hotel
18.Banyan Tree Club & Spa
19.Shilla Hotel
20.Dongdaemun Market
21.Daehangno
22.Changgyeong Palace
23.Changdeok Palace
24.Insadong
25.Cheonghwadae
26.Gyeongbok Palace
01.Gwanghwamun 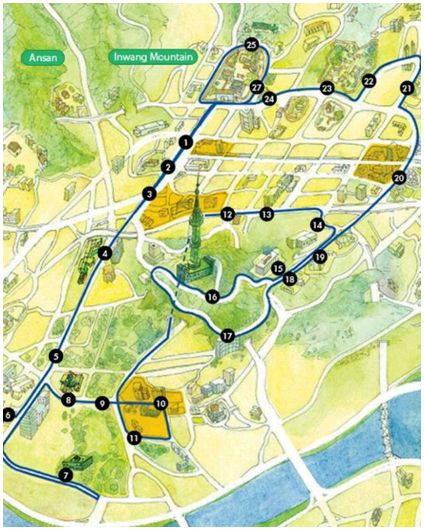 Both these courses include all the major tourist attractions of Seoul. You may purchase a ticket, good for the day, at any stop on the course and get on and off at any stop, as many times you like. The bus comes every 30 minutes but that depends on the traffic jam. 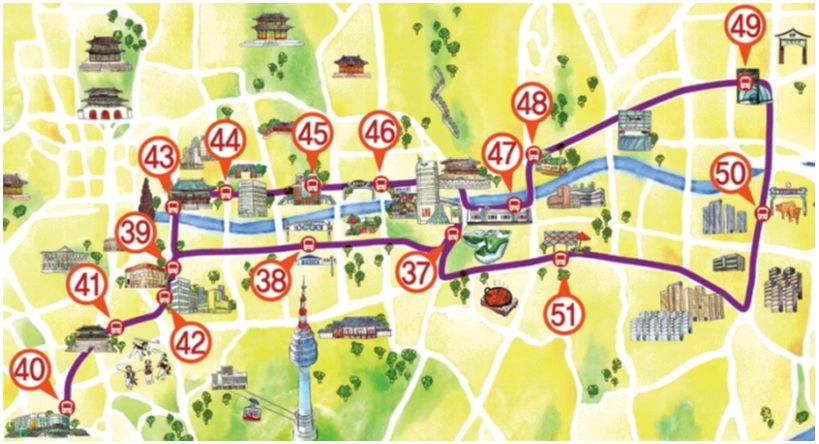 I use the one-day pass which costs 10,000 won and is valid from 9am to 9pm. There is also a night bus at 8pm for 5,000 won. You can purchase tickets in front of the Donghwa Duty Free Shop near Gwanghwamun subway station. Ticket booth is closed on Mondays, except for Mondays that are national holidays and Mondays during the summer season.

Tips: If you only have time for one bus tour, I would suggest you take the Seoul City Bus route. The traditional markets are similar (as is with all markets all over the world).