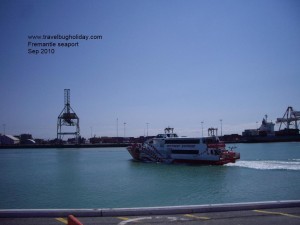 After a very long drive the previous day to the Yamchep National Park, we decided to head to Fremantle, approximately about 20km south-west of Perth CBD, only 20 mins drive from the CBD, where it straddles the harbour on the edge of the Indian Ocean at the mouth of the Swan River. It is the original port and still supports a major maritime

industry. It is very much a laid-back city. It’s a place of sidewalk cafes, restaurants, bistros, buskers, museums, craft shops, painters — and boutique beers. It has an excellent range of Italian and Greek Restaurants as well as Thai, Japanese, Chinese and Turkish. You can also find traditional Australian fare as well. There are lots of al fresco cafes for coffee culture and an excellent collection of antique shops. Fremantle is actually part of the continuous built up area that we call “Perth,” but most people especially the locals considered Fremantle to be a different city. Here, an artificial harbour was built in the 1890s which turned Fremantle into the seaport of Perth. Fremantle had virtually grown into a beach-side suburb of Perth. The locals would consider Fremantle small enough to walk around comfortably but as a tourist, I feel it would take 2 days if you want to see everything in Fremantle. There are many attractions, such as the Maritime Museum, which houses many interesting exhibits from the shipwreck of the Batavia.  The Fremantle History Museum is housed in a convict-built building and has an excellent selection of exhibits about the region. The Fremantle Prison is an imposing structure with reminders of the regional history. The convict-built Old Fremantle Prison is open daily. You may want to join one of its eerie candlelight tours on Wednesday and Friday nights. Fremantle is considered one of the best preserved 19th century seaports in the world, with more than 150 buildings classified by the National Trust. 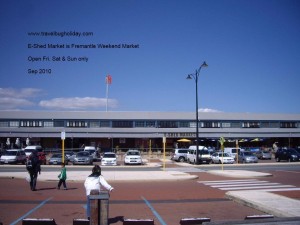 and Sundays, sells craft items, antiques, jewellery and various other interesting items.It is indeed a colourful attraction and buskers are ready to entertain you.  Take time to potter through the market for fresh produce or  gifts. Shopping (being a tourist) would certainly take up half a day in the 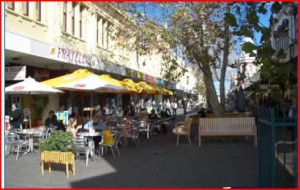 market however the market is not as big as the Victoria market in Melbourne, Australia. Fremantle is popular with the locals as a place to go for a coffee, along the famousn’cappuccino strip” and is even more laid back than Perth, a place the locals from Perth would head down to Fremantle for the weekend. If you rent a moped or sometimes called the scooter here, you will certainly get through Fremantle in one day. I noticed that access for people with 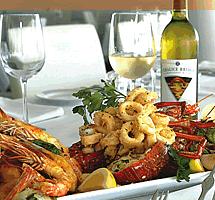 Before I went to Fremantle, I had done some reading (as I always do) before I visit a place. It is a historical site of colonial convict buildings with many of the building kept or restored to its former glory such as buildings from the 19th Century. There are splendid examples built during the early Gold Rush days as well.

Fremantle history is certainly one of the aspects of this town that interests me. I read that when Fremantle was first established in 1829 at the mouth of the Swan River, it was meant to serve as the main port for the new Colony. However, it really did not play that role till the end of 19th Century, when a suitable harbour was dredged. Like Perth, Fremantle started 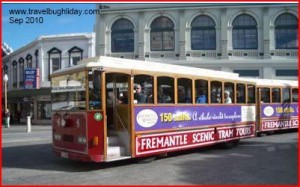 to really grow with the influx of convict labour which built the town’s earliest structures, many of which have now been listed for protection and conservation by the National Trust

The town failed to grow until the gold was discovered in the 1890s. However Fremantle lit up again when the Western Australian yachting and Royal Perth entered a new era in 1972 when Alan Bond brought the 12 metre yachts Gretel I and II for training purposes, and built Southern Cross for the 1974 challenge for the America’s Cup. He repeated that effort in 1977, 1980 and 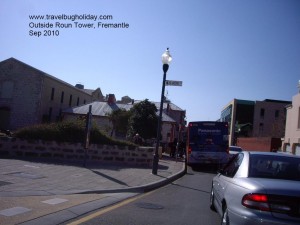 The 1987 America’s Cup, staged in Fremantle by Royal Perth, is

regarded as the most successful ever in terms of event management, world-wide promotion, national and international goodwill and corporate success.

The Cup defence was held off Fremantle in 1987 in a sea duel which saw America regain its Cup (but which it lost again, later, to New Zealand).

Nowadays, Fremantle is a very much alive, yet laid back coastal city with a thriving port for commercial shipping as well as pleasure craft. It also has a thriving nightlife scene, with a growing collection of restaurants, pubs and eateries. At Fishing Boat Harbour, there are waterfront restaurants with great views to Rottenest Island and grand ocean sunsets. This is where you will find the freshest  fish and If you have the time, you must visit Rottnest Island. It is simply 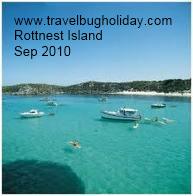 stunning and peaceful, popular for snokelling, scuba diving surfing , swimming and even whale watching. This place features a picturesque scenery and some of the world’s finest beaches and bays, is located just 19 kilometres off the coast of Fremantle. At visit to this island is just a short ferry trip away, about 30 minutes from Fremantle.  Originally occupied by the indegenous people of the Nyoongar Tribe some 6500 years ago, the island has been made use of, in many ways since the arrival of European settlers. This include farming the island for salt and using it as an Aboriginal 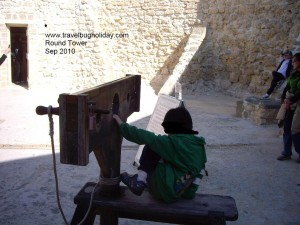 penal colony. The prisoners who were kept here from 1838 0 1904 are responsible for the construction of many of the buildings around the island, including the lighthouse.

The arts and culture are well represented here, numerous art galleries inhabit the restored buildings, and you can also visit the Fremantle History Museum and Arts Centre. Located in a restored Gothic design building originally it was built as an Asylum for the Insane. Now it houses exhibitions, music concerts and display works of by Western Australian artists.

There is an Art and Culture Trail that explores the artistic and creative side of Fremantle. Taking in many of the studio galleries and art galleries, this walk takes you to more than 30 Fremantle places that exhibit and sell Australian arts and works.

cruel justice, the Batavia tragedy continues to fascinate.There are other shipwrecks, including the Zuytdorf, the Zeewijk and the Gilt Dragon, with artefacts and displays of what and where it happened. 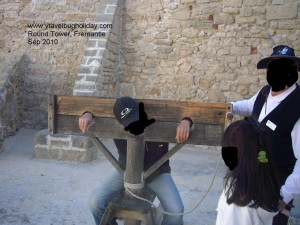 I also stopped at the Roundhouse, built in 1831 and the oldest surviving public building, originally

a gaol. Entrance fee is by donation. The caretakers here are very friendly. If you are lucky they can unlock the padlock and let you put your head and arms through the wooden ‘goal’ for you to have your photo taken.

Nearby is the Fremantle Museum and Arts Centre, also worth a look. This museum on Finnerty St, originally a convict-built lunatic asylum, houses a fine collection relating to the settlement’s early history, the whaling industry, and Dutch East India company ships which first discovered the western coast of Australia.

Other places worthy of a look is the old Fremantle Jail, built by convict labour. Tours of the jail are available. 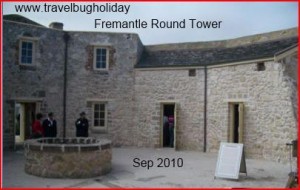 The convict-built Old Fremantle Prison is open daily. You may want to join one of its eerie candlelight tours on Wednesday and Friday nights.

If you happen to be in Fremantle, from November 4 to 14, be sure to take part in the 2010 Fremantle Festival. Its is a celebration of the unique, stimulating and colourful culture that enriches Fremantle and invites participation of all cultural, ethnic, arts and community groups.

The festival traditionally includes a number of free events, and this year these include more than 70 festive offerings ranging from large spectacles to intimate visual

Some of the highlights of this year’s festival program include art exhibitions, the Children’s Fiesta on November 5 at Samson Park, the return of the Kite Extravaganza at South Beach and Wardarnji in its new location in the beautiful grounds of the Fremantle Arts Centre. If you happend to be around Fremantle on Australia Day, check out the Fireworks at the Fishing Boat Harbour. Fremantle skies come alive with bursts of colour as fireworks light up the night.

In March/April there is the Fremantle Boat Show. This is a showcase of all apects of boating activities from luxury cruising, sailing, fishing and s

Easter Long weekend is a great time to visit Fremantle as well. You will experience the supreme skill and outrageous bahevious of the world’s best baskers at Fremantle street Art Festival. The streets of Fremantle will ignite over the Easter weekend with more than 100 performances of wildly entertaining acts.

Another festival in Fremantle not to be miss are the rainbow of floats meandering through the streets. This will be in November.

One way of getting an overview of Fremantle’s attractions is to take the historical tram tour which leaves hourly from Town Hall. For the price of the ticket, you get a full commentary on points of interest along the route.

Since we had a car, there was no trouble getting to Fremantle. However if you don’t have a car, there is a regular train service to

Fremantle from Perth from the City Railway Station. Buses are available from Perth City Centre Bus Terminal. In Fremantle, there is a free CAT bus service leaving from the Fremantle Train Station. It is only a short drive of approximately 20 mins south west from the Perth CBD (Central Business District).

If you’re coming from Perth, the easiest and probably cheapest way is to take the train to Frem

antle which runs at 15-minute intervals. There are buses, too, or you may prefer to go by water and take the ferry.

Other exploratory walks around Fremantle concentrate on history, hotels and breweries, Aboriginal heritage and the waterfront. For a different kind of experience, take the Fremantle Aboriginal Heritage Walking Tour. I didn’t join the tour as I didn’t have time but I read these from a brochure. It sounds like a great tour.

Many aspects of the life and history of the Aboriginal Nyoongar people come to light in the Fremantle Aboriginal Heritage Walking Tour. 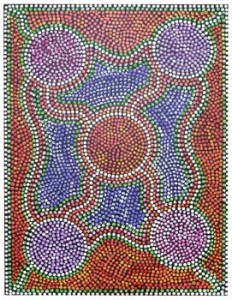 As Aboriginal guides trace the path of indigenous culture and history in Fremantle, you realise that the Swan River is very much part of the Aboriginal Dreamtime and that Aborigines see it as the most significant Dreaming trail in the area of Wagyl or the winged Rainbow Serpent. 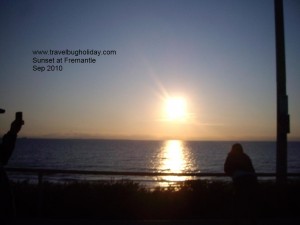 In the body of Aboriginal beliefs, the fabulous creature that is the Wagyl or Rainbow Serpent inhabited the reaches of the Swan River and is attributed with the formation of the river bed when it slid through the sand with its huge body. In the Nyoongar belief system, the Swan River was thus created and is evidence of Wagyl’s existence.

The story of Wagyl, and aspects of Aboriginal history in the Fremantle area, is learned in the course of the Aboriginal Heritage Walking Tour.

For instance, Fremantle’s Round House, built in 1831 on Arthur Head, is not only Fremantle’s

oldest building and was originally a local prison. In later years it was used to hold Aboriginal prisoners before they were taken to prison on Rottenest Island.

al resistance hero Yangan, one of the first prisoners in the Round House, rebelled against the treatment he received from the white settlers and was hunted down and killed in 1833. His head was separated from his body and was brought to England where, after being displayed in a Liverpool museum was buried in a mass grave in 1964. The head was exhumed in 1977 and an Aboriginal delegation brought it back to Perth.

The Fremantle Aboriginal Heritage Walking Tour starts at the Fremantle Maritime Museum near the waterfront and wends its way through the city to the Round House before returning to the museum.